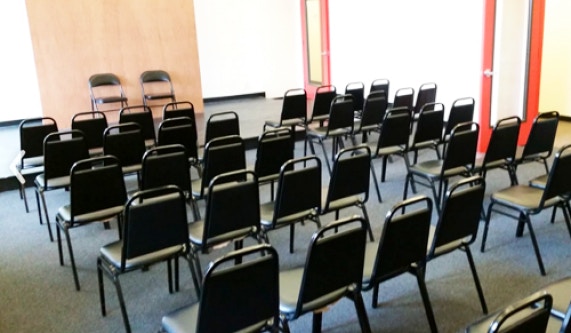 Magnet Theater is a performance space and training ground for the best and brightest comedic talent in New York City. Since 2005, we’ve been at the epicenter of the city’s growing improv movement—and today, we’re one of the most recognizable improv schools and theaters in the city. We’ve got critically acclaimed shows and classes in improv, musical improv, sketch, storytelling and more every single night of the week.

After studying in Chicago under improv guru Del Close, Armando Diaz, Ed Herbstman and Shannon Manning joined forces with improv teacher and veteran performer Alex Marino to open the Magnet Theater in March 2005. Today, the theater continues to be operated by Diaz, Herbstman and Marino.

On any given night at Magnet, you’ll see our performers doing what they do best—creating some seriously amazing stuff in order to make you laugh. We’ve had improv powerhouses like Mike Myers join us onstage and conduct workshops. We’ve trained budding comedians from around the world. But most importantly, we’re giving a whole new generation of talent a place to take risks, be heard and blow minds.

Magnet’s philosophy is simple but it’s been working pretty well for the last 10 years. Simply put, we can teach anyone to improvise. Our faculty is made up of veteran instructors—both homegrown as well as transplanted from the oldest, most esteemed comedy institutions in the country. And as such, our students get comprehensive training in the styles and philosophies that have been shaping the art form for generations.

The new Magnet Training Center, marks a huge development in the history of the Magnet and the New York comedy community. For the first time since most anyone at Magnet can remember, we’ve got all of our classes running under the same roof, bringing our community of students, teachers, and performers together on a nightly basis. It also means that more classes are being offered in improv, musical improv, sketch comedy, and storytelling than ever before and that’s great news for all of New York, whether you’re a comedian, actor, singer, storyteller, or audience member.

Attended: Improv Level One: The Principles of Improv

The class is a lot of fun! I learned great improv techniques. The instructors make us feel comfortable and supported. And it’s a great way to meet and connect with people.

Lots of fun and lots of learning..

Louis is literally the best teacher I have ever had. His style is so supportive and I have learned new ways of approaching my improv performance. The only drawback is that I wish the class was smaller.

It was hard work, but the experience was amazing and the teacher is clearly an expert in his field.

Attended: Character and Point of View

What a phenomenal experience! It was my first time at Magnet and I was not disappointed - the class could not have been more beneficial or engaging! I loved Melissa's energy and intention, her clarity, her preparation, and her dedication to the class objective. I don't think of myself as primarily an improviser and she still made me feel capable and comfortable - by the end of class I was volunteering to go first! It was a fantastic experience and definitely satisfied my itch to push myself out of my comfort zone and work with some new people! I really hope to come back and take the intro courses, as well as try a few drop ins! I'm so glad I decided to come down for this one!

I enjoyed the class! We did fun exercises and warm-ups. They really give you a safe space to be animated.

It was very fun! I enjoyed acting out different scenes during Improv!

It was informative and fun!

Exactly what I was looking for. Teach was awesome, I’d like to do this class again.

Excellent critic both positive and negative

Improv Level One: The Principles of Improv
Next start date: