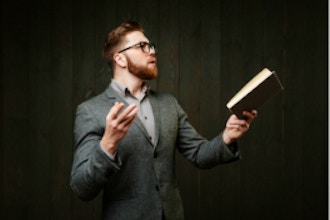 What you'll learn in this general acting class:

We are honored and excited to have Rolf Saxon (AEA, BAE, SAG/AFTRA) join our staff at SFAA! Currently, he is a Professor of Drama at Ohlone College and has worked at the Berkeley Rep and the Royal Central School of Speech and Drama in London. He has worked extensively in film, television and theatre including the Royal Shakespeare Company, Theatre Complicte, and the Royal Court as well as West End and regional productions. He will be alternating with Michael Navarra to teach one of our most sought after workshops Acting In Films. AIF is all about finding the truth and in this class, you will absolutely learn how to give truthful and authentic performances for the camera. This class gives beginning and experienced students a professional approach to acting that covers script analysis, scene study, blocking and auditions. Scenes will be recorded in the studios of Beau Bonneau Casting, using HD equipment. Full attendance is required, as students will be paired up with scene partners and set to shoot on specific dates. Sunday nights means easier parking and less traffic!

Booking is safe. When you book with us your details are protected by a secure connection.
Lowest price guaranteed. Classes on CourseHorse are never marked up.
This class will earn you 3250 points. Points give you money off your next class!
Questions about this class?
Get help now from a knowledge expert!
Contact us
Questions & Answers (0)

The San Francisco Acting Academy was founded in 2001 in collaboration with Beau Bonneau Casting and several teachers and actors in the Bay Area. It is our mission to provide the space for both new and experienced actors to hone their camera skills and to make them competitive in the Bay Area acting...

This school has been carefully vetted by CourseHorse and is a verified SF educator.