Thankfully we have 1 other Performing Arts Class for you to choose from. Check our top choice below or see all classes for more options. 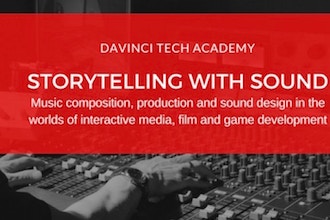 What you'll learn in this music production course:

Music composition, production and sound design in the worlds of interactive media, film and game development.

To understand the power of music and sound design for use in interactive media, narrative film, or game development, you must first embrace the concept of telling a story using sound as the medium. To facilitate this gaining familiarity with the fields of filmmaking, storytelling, music and audio production, and, of course, music composition is imperative. Toward that goal, the true concept of the “underscore” must be fully explored and understood.

Designed for those exploring the music field with an interest in becoming a composer, sound designer or content developer, this program will enlighten you to the modern process soundtrack production. And, by learning the various types of content used in production, you’ll gain an understanding of how you can create and/or enhance a powerful experience through the use of sound.

Upon completion of this course, you will have gained a general appreciation and knowledge for the craft of composing music both interactive and noninteractive media. In addition, you will now possess a basic operating and functioning knowledge through exposure to current technology being used for music composition for media – including digital audio stations, computer based music software, and the use of virtual instruments and software plugins.

In this course, you will learn:
Who Should Attend:
Recommended Pre-Course Reading
Course Tools:
Price includes lunch catered by a variety of local restaurants, light snacks

Refund Policy
Students who cancel by notifying DaVinci Institute prior to the first day of the course are entitled to a full refund of all tuition paid. Students who withdraw once the course has started are not entitled to receive a refund.

If the course is cancelled by DaVinci Institute students will be entitled to a full refund of tuition.

Booking is safe. When you book with us your details are protected by a secure connection.
Lowest price guaranteed. Classes on CourseHorse are never marked up.
This class will earn you 24990 points. Points give you money off your next class!
Questions about this class?
Get help now from a knowledge expert!
Contact us
Questions & Answers (0) 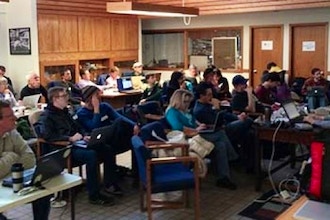 We pride ourselves in making sure our students have the skills to pass our courses and get a job in the industry. We aren't a four-year college, two-year college, or even a 6 month full-time boot camp. Our courses are designed to help you meet your goals by getting your foot in the door and starting...

This school has been carefully vetted by CourseHorse and is a verified DEN educator.

Learn about the world of streaming television services and how to watch on your devices.

Learn about the world of streaming television services...

$25
8 Seats Left
Don't see any dates that work for you?
Add to Wishlist